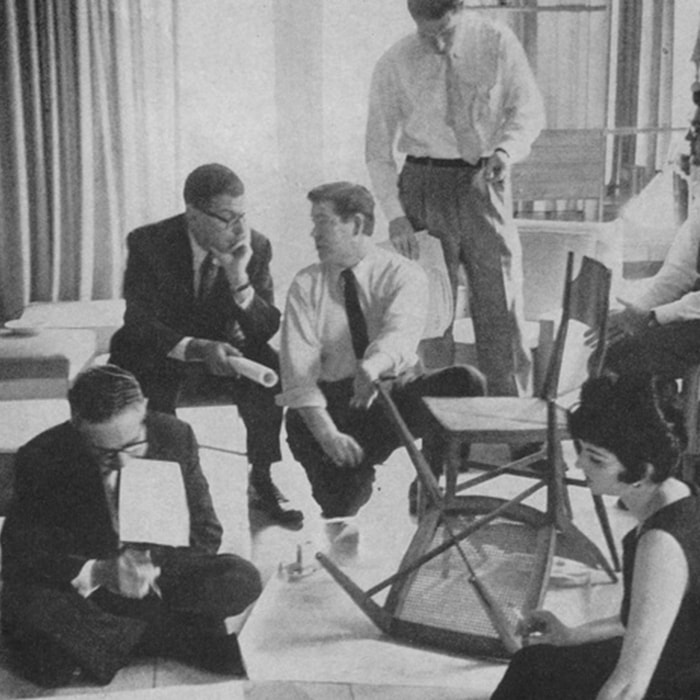 Paul McCobb first came to prominence in 1948 as a design and decorating consultant for Martin Feinman’s Modernage Furniture in New York City. While employed at Modernage, McCobb met B. G. Mesberg, his later business partner in the Planner and Directional furniture lines.

Best known for his furniture designs, McCobb also designed radios and televisions for CBS-Columbia, Hi-Fi Consoles for Bell & Howell, along with other household items. He acted as design consultant to many leading corporations, including Singer, Alcoa, Goodyear, Columbia Records, and Remington Rand. For years, he traveled throughout America for speaking engagements, panel discussions, and appearances on radio and television talkshows, and he had his own syndicated design column in newspapers across the country.

Besides his public engagements, he taught design at Philadelphia Museum School of Art.

Paul McCobb was the recipient of MoMA’s Good Design Award five times between 1950 and 1955 as well as of the Philadelphia Museum of Arts’ Contribution to Better Design Award in 1959.

Paul McCobb’s design aesthetic is simplicity of form with a lack of ornamentation. Inspired by his New England upbringing and influenced by Shaker Design, McCobb combined slender lines with sculptural forms. He offered a playful take on traditional forms with hints of Scandinavian craftsmanship and International style clarity, often made with affordable and robust materials such as iron, solid wood and durable upholstery.